Kirtland’s Warbler and the excitement of birding

Being relatively new (four years or so; two really active) to birding, there are still a lot of new life birds I see and things that I am learning. Learning is important to me; I wish to always be learning and encountering new experiences. This experience of the Kirtland’s Warbler was an enlightening one.

I was walking the boardwalk during The Biggest Week In American Birding and one of the groups walking by had said that a Kirtland’s Warbler was spotted on the Estuary Trail. Being the Communications Director for Black Swamp Bird Observatory, I had to document that! I followed the group off of the boardwalk, through the parking lot, and down the beach. The Estuary Trail snakes from the Lake Erie beach, down a little path, and down some dikes. Before reaching the dikes, there were a group of birders standing on a big mound of dirt looking into an old, dead tree that had snapped over. There was a Great Horned Owlet! I had never seen one before, but I had to keep going! There was a Kirtland’s! 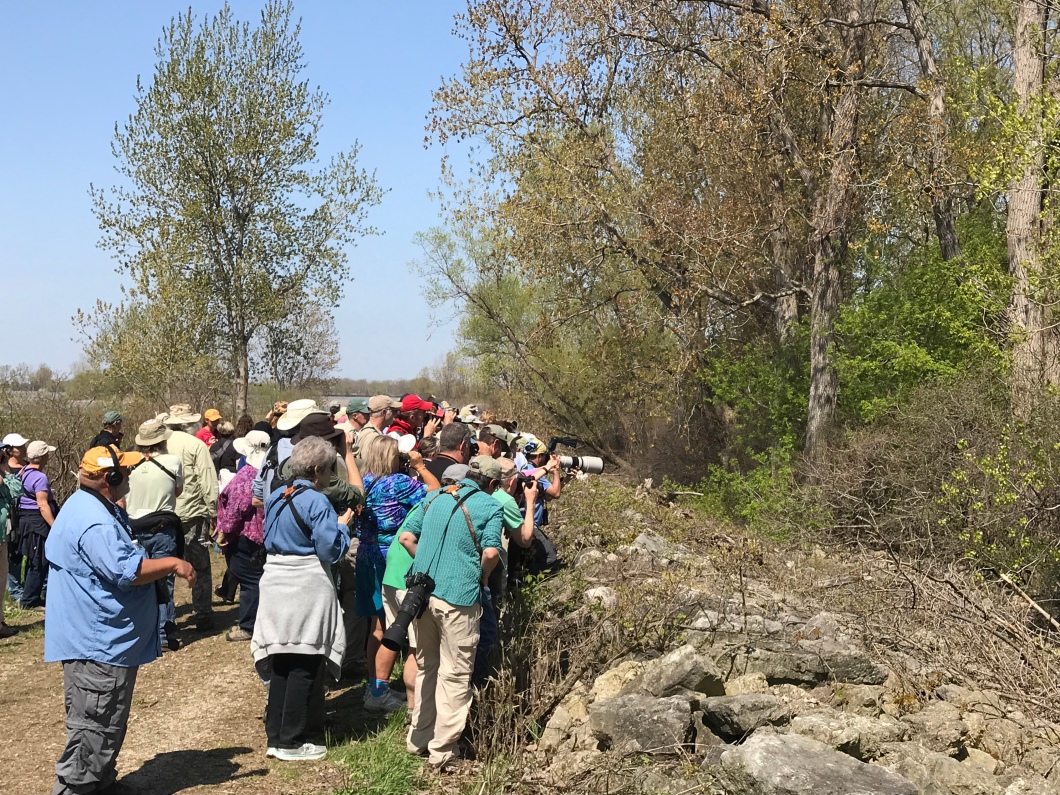 The crowd on the Estuary Trail viewing the Kirtland’s Warbler May 6, 2019.

I walked a little further and up the dike and saw a huge group of people. I worked my way over and my dear friend Nancy Bogart let me go in front of her after she got some good looks. When I got to the front I realized that I was in the perfect spot and the bird was spotted at my 12:00 about 50 yards in front of me. Even though I am short, I didn’t want to block anyone else’s view so I knelt down… onto a pricker bush. The thorns went into my knees and legs, but it didn’t matter. The energy and excitement of seeing this tiny little traveler was all that mattered to me and everyone around me.

That is something that I really let myself see so obviously this year during Biggest Week: the genuine excitement, the happiness, and the love. It takes no effort whatsoever to bring those three things to the forefront of this festival, it happens on its own. People from all walks of life, all backgrounds, all religions, all ethnicities, and all races come together to witness a magical phenomenon, spring songbird migration, something that has happened for years with or without man-kind. Feeling that common collective of happiness and genuineness is really invigorating. It is something you have to see and experience to believe. Non-birder friends might think that it is cheesy, but nature and, especially in our area, spring songbird migration are magical.

These tiny little, beautiful birds travel thousands of miles at night on instinct to their breeding grounds. The stamina and perseverance that takes is inspiring. Battling wind, weather, and man-made structures with a life or death drive inside you takes guts.

So, with that being said, back to the Kirtland’s. There were five reported in our area during this year’s festival. Last year there were zero. The Kirtland’s Warbler is an endangered bird and according to Kenn Kaufman’s Lives of North American Birds their decline began in the 1960s. Census numbers dropped from 502 singing males in 1961 to only 201 in 1971. The counts through most of the 1970s and 1980s hovered around 200 males. Since 1990, the numbers have gradually increased. In 2001, the tally of singing males topped 1000 for the first time, increased to 1700 by 2007, and hit 2000 in 2012. The National Audubon Society says although these are still dangerously low numbers for a songbird, the trend is encouraging.

Conservationists are helping the bird by providing more habitat (controlled burning creates the stands of young jack pines needed by the warbler) and by controlling the numbers of parasitic cowbirds in the nesting areas.

Below is a video that was taken at the moment where we were trying to view the Kirtland’s Warbler. It captures some of the chatter and excitement of the moment. In the video the rustling of the leaves at the bottom next to the tree trunk is the bird moving.